ALBERT TORCASO Ask Garth Brooks To Leave Wal Mart Because They Treat Their Employees Badly And Ninety Percent Of Their Products Are Imported!!!

I was dismayed to hear that your music will now only be available through Wal-Mart stores and I am writing to urge you to reconsider. You've said "it's great to work for Wal-Mart," but you should know the truth about the harsh reality experienced by Wal-Mart workers before signing on the dotted line.
When Wal-Mart workers try to stand up for themselves and form a union to negotiate for better wages, more affordable health care, and basic protections on the job, they often endure threats, discrimination, intimidation, and even firings.
Last year, Wal-Mart - the world's largest employer and corporation - raked in $10,000,000,000 in profits. And yet many of the company's 1.3 million employees -including your fans and supporters - barely make enough to cross the poverty line.
As the world's largest corporation, Wal-Mart sets the tone for workers' rights around the world. When Wal-Mart does anything to stop its workers from forming unions and exercising their rights, other corporations will likely follow Wal-Mart's path.
Your music provides a soundtrack to the lives of ordinary Americans. Your fans are honest hard-working people, the very same people that endure Wal-Mart's unfair treatment. You take on their issues in song after song, and now we ask that you stand up for them as your co-workers. I urge you to reconsider and drop your deal with Wal-Mart.
http://action.americanrightsatwork.org/campaign/brooks

Mr. Brooks, if you really care about America your fans and freedom you must take a stand and find a new outlet to sell your music. Please don't put human lives behind the needs of profit. You can still make millions of sales of your music and income, but please don't do it with Wal*Mart because they don't share your values and don't care about you, your fans America or freedom.
A fan of yours
Albert Torcaso
Pittsburgh PA
By Albert Torcaso - January 20, 2006 20 comments: Links to this post

ALBERT TORCASO ASKS Don't you standup for anything?

When will you act? When will you call, write both real mail and e-mail, or fax them? And stand up for what you believe in? I care not what political party you favor nor if you are on the right or left. What I care about is that you act! You must let Congress and the President know where you stand on Social Security, Iraq, Budget cuts, Health Care, Environmental issues, and many other topics. I am one who leans to the left, but I do not hate anyone from any side. True, I may hate their policy, but not the person or party.
I ask you to act, but did you know I write my Congress people on many issues and get letters from them almost every other week.

I get their letters because I write them or call them. I act on what matters to me and to this nation. So, I say when will you quit making excuses for not getting involved? Don't say you're too busy for this would be untrue. If you can click on my blog you can scroll down to the links on the right that include the House and the Senate and you can make yourself be heard!

They really do listen to us, but you must take the action for them to listen to you.

A post I made about all of Congress passing a national ID law drew no attention on this blog. Do you not see the horror in such a law?

A few more steps like these and soon you may need to get permission just to go from state to state. Over reacting you say? I don't agree because there is already in place a FEC = Blog law which reduces freedom of speech and with this ID card law passed by both parties!

Protecting our freedoms is not the job of those in Congress IT IS YOUR JOB, MY JOB, AND ALL OF OUR JOBS TO DEMAND OUR FREEDOMS, NOT BE TAKEN AWAY IN THE NAME OF PROTECTION OF
THIS NATION.

They need not take away my freedom to stop terror. I call taking our civil rights away the real terror and NOT ENOUGH OF AMERICANS ARE STOPPING THEM!

Let us stop their actions by writing, protesting, calling, faxing and letting them know they won't take away our freedom and If they still won't listen we gather together million of us and launch the LARGEST CLASS ACTION LAW SUIT IN THE HISTORY OF THIS OR ANY NATION! THAT'S RIGHT IF THEY WON'T LISTEN WE SUE CONGRESS AND OUR OWN GOVENMENT!

Or are we to allow Congress to erase the 229 years of our free nation? Will you let our forefathers who fought for freedoms we enjoy be lost? The very fact that Congress made this national ID law shows without a doubt if we do not demand that they repeal this law then we, as Americans, can expect more restrictions of our freedoms and that is too high a price for us to pay.

Now, go and click on those links and take action! FOR THE LOVE OF OUR GREAT NATION AND THE MEMORY OF OUR FOREFATHERS PLEASE ACT NOW AND FOREVER!!
OR DON'T CRY FOUL WHEN YOUR FREEDOMS ARE GONE.

Sometimes standing up for America makes you a leader of many.
By Albert Torcaso - January 12, 2006 No comments: Links to this post

Well I am going to try to start eating a healthier diet. It won't be easy as I can't stand veggies and many other good foods but I am getting this book and will try to follow it's advice. I am now on a board of directors with a new type of business idea. And people depend on me now more than ever so I guess I need to take better care of myself as I want to live at least to sixty years old. If I don't change my eating habits I won't make sixty! If I change who knows how long I'll live maybe even to seventy or longer? But I need to make changes now!!!

I remarked I hope I like it. Well, it's time I learn to like it so that I'm still around years from now.

Superfoods Rx: Fourteen Foods that Will Change Your Life
By Steven G. Pratt and Kathy Matthews


From The Publisher:
SuperFoods Rx is based on a simple but profound premise: some foods are dramatically better than others for our health and longevity. Sure, everyone knows that an apple is a better snack than potato chips, but do you know that a daily handful of walnuts or a bowl of blueberries can actually improve your well-being and longevity?

Steven Pratt, M.D., witnessed the positive results that occurred when his patients with age-related macular degeneration changed their diets to include certain powerhouse foods—those he has identified as "superfoods." Backed by proven research on fourteen of the most nutrient-dense foods, this book puts these tools in your hands, and on your plate, to give you more energy, greater protection against disease, and a healthy lifestyle now and for the future. By making these foods part of your regular eating habits, you can actually change the course of your biochemistry and stop the incremental changes in your body that lead to diseases such as type II diabetes, hypertension, certain cancers, obesity, and Alzheimer's.

ALBERT TORCASO Ask He did not really say those things did he?

Could he really have said these things? I mean these are very stupid statements. I can't believe anyone would say such statements in public. I'm asking you did he really say this or did somebody make these up?
All I can say is if he did say these things he should be put in treatment for mental illness.
Albert
Tom Delay Quotes

1) "So many minority youths had volunteered that there was literally no
room for patriotic folks like myself." --Tom DeLay, explaining at the
1988 GOP convention why he and vice presidential nominee Dan Quayle did not fight in the Vietnam War

2) "Now tell me the truth boys, is this kind of fun?" -Tom Delay, to three young hurricane evacuees from New Orleans at the Astrodome in
Houston, Sept. 9, 2005

3) "I AM the federal government." -Tom DeLay, to the owner of Ruth's
Chris Steak House, after being told to put out his cigar because of
federal government regulations banning smoking in the building, May 14,
2003

4) "We're no longer a superpower. We're a super-duper power." -Tom DeLay, explaining why America must topple Saddam Hussein in 2002 interview with Fox News

6) "Guns have little or nothing to do with juvenile violence. The causes
of youth violence are working parents who put their kids into daycare,
the teaching of evolution in the schools, and working mothers who take
birth control pills." -Tom DeLay, on causes of the Columbine High School
massacre, 1999

7) "A woman can take care of the family. It takes a man to provide
structure. To provide stability. Not that a woman can't provide
stability, I'm not saying that... It does take a father, though." -Tom
DeLay, in a radio interview, Feb. 10, 2004

8) "I don't believe there is a separation of church and state. I think
the Constitution is very clear. The only separation is that there will
not be a government church." -Tom DeLay

9) "Emotional appeals about working families trying to get by on $4.25 an
hour [the minimum wage in 1996] are hard to resist. Fortunately, such
families do not exist." -Tom DeLay, during a debate in Congress on
increasing the minimum wage, April 23, 1996

10) "I am not a federal employee. I am a constitutional officer. My job
is the Constitution of the United States, I am not a government employee.
I am in the Constitution." -Tom DeLay, in a CNN interview, Dec. 19, 1995
By Albert Torcaso - January 07, 2006 19 comments: Links to this post

ALBERT TORCASO Listen To This Just for fun hear my cat growling! 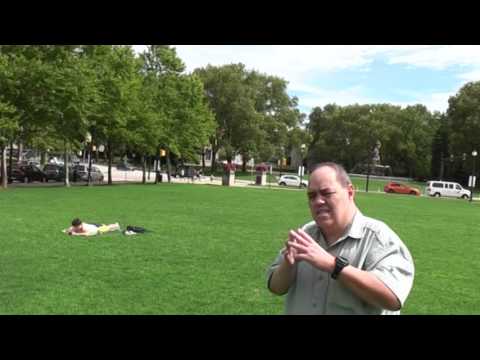